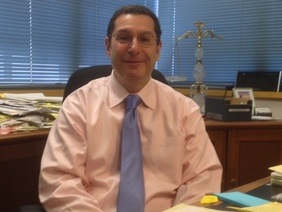 I grew up in New York City and received my bachelor’s in history and education from Adelphi University in 1978. After this, I left for law school at the University of Tulsa to study Real Estate Law. After graduating in 1981, I settled in Saint Louis. Since that time, I’ve practiced family, real estate, personal injury, and other types of law around the Saint Louis area. Today live in Ballwin with my wife of nearly 25 years and spend as much time as possible with my 4 grown children and 3 grandchildren.

Why I Practice Law

When I first entered the workforce, my parents encouraged me to do something where I could make a difference in the lives of others. I tell my children and grandchildren to do the same thing in their lives. After over 35 years practicing law, I’m proud to have had the opportunity to help individuals and families advocate for themselves and make it through tough times.

Some time ago I had a Divorce case that is still the seminal case for “time limits” in Missouri. It involved child custody, child sexual abuse, domestic violence and marital rape. We had a 5 day trial that included nights and weekends. The matter was under submission for ruling for 18 months before the Judge finally ruled in our favor. My client won custody because I proved that the children were sexually abused. In a rare case I also proved my client (the mother) was the victim of domestic violence including marital rape. The father received supervised visitation through the Juvenile Court. When the children were old enough, they chose to terminate their contact with their father. Today they are adults, happy and well adjusted individuals.

In another case I was appointed by the Court to represent 4 little girls. The case had custody/visitation trials in both Divorce Court and Juvenile court. The father sought custody of the children because the mother had drug issues and was unfit to have custody. The maternal grandparents also sought custody. There were some complications with the Indian Rights Act because of the grandparents’ heritage. The Divorce Court ultimately kept the case. The Deputy Juvenile Offer and I (as Guardian Ad Litem for the Children) visited the father’s home while the children were staying there. I learned that the children were not properly cared for. The older child (12) had to wake up every hour or so to turn on the clothes dryer to heat the children’s bedroom. The girls were always hungry because the father did not or could not adequately feed them. Father also used a paddle to discipline the children. They each had their own paddle hanging on the wall. The breaking point in the case was when I had the youngest child, who was only 4 years old, testify about the father’s abuse and neglect. The older three children were too traumatized to testify. The grandparents were rightfully awarded custody. When the Judge issued his ruling there was not a dry eye in the Courtroom. The children were afforded the opportunity to grow up happy in a warm home with plenty of food and plenty of love.

I was involved in yet another Custody Modification matter where my client (the father) was incarcerated by a bogus Texas warrant for alleged nonsupport. The mother lived in Texas, the father in St. Louis City. They fought for custody over the 13 year old boy both in St. Louis City and Texas simultaneously. Eventually Missouri won jurisdiction. The mother was represented by an Assistant U.S. Attorney volunteering his time. The mother’s attorney had my client arrested on a bogus Texas warrant which was eventually quashed, but not until the father was wrongfully jailed. Additionally, this Assistant U.S. Attorney helped the mother kidnap the child and spirit him to Texas while the case was pending. The City Family Court Judge was livid over this and ordered the child to be returned to Missouri. After two days of trial involving jurisdiction and custody, the father prevailed.

Speaking Engagements
I have organized seminars and have lectured extensively on child custody, child and spousal support, modifications, and adult and child abuse issues for the Bar Association of Metropolitan St. Louis (BAMSL), National Business Institute (NBI), and private and community based organizations. I have also spoken at a number of local High Schools about Family Law Issues and Domestic Violence.
Distinctions
I served 5 separate terms on the Board of Governors for the Bar Association of Metropolitan Saint Louis(BAMSL) and served 5 separate terms as Chair of the Family and Juvenile Section. I am also a member of St. Louis County Bar Association and The Missouri Bar Association.

We will respond to your inquiry in a timely fashion. Thank you.